• Your Cart Pop-up
• Marketing Support
• And so much more...

Mayday Industries is proud to announce the official release of our new designed website. We invite you to discover the many exciting features of the site that offer a professional and easy navigation environment for our distributors and customers worldwide. Here are some of the many features you can explore: And so much more...
Website FeaturesTutorial
Written by
Test Order
Posted in
Blog
For Immediate Release
WESTMINSTER, Calif. – (March 15, 2016) – An Orange County disaster preparedness expert says predictions of a mega-earthquake in Southern California are a very real reminder of why it is so vitally important to be prepared.

Revised estimates by the US Geological Survey put the chances of a magnitude 8.0 or greater earthquake in the next 30 years at 7%.

“This prediction reinforces the message that the best defense against earthquakes is to be prepared,” said Mayday Industries Operations Manager Cindy Popoff. “We can’t stop quakes from happening, but we can minimize their effects.”

Scientists have revised their estimates upwards based on new research showing that fault lines are interconnected http://www.usgs.gov/newsroom/article.asp?ID=4146#.VucMevkrKUk

They say earthquakes can jump from one fault to another and multiple simultaneous ruptures could cause a mega-quake.

“Earthquakes can be deadly and a lot us put ourselves at risk because we’re not prepared,” added Ms Popoff.

“For example, everyone should have a three-day emergency kit because chances are first responders won’t get to you for at least the first 72 hours after such a mega-quake as predicted by the USGS.

“The fact is emergency kits will help you and your loved ones survive. Kits should contain food and water, first aid, emergency lighting and more and you should have them in your home, office, or car.”

The USGS says it’s possible that the San Andreas Fault may have ruptured together with the San Jacinto Fault to trigger a powerful earthquake 200 years ago that was felt from Los Angeles to San Diego. The long-held scientific belief is that the San Andreas is due to rupture every 150 years.

Mayday Industries is a leader in the disaster preparedness industry. For more information, please visit www.maydayorders.com. 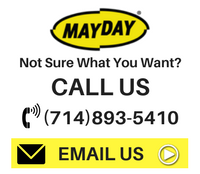